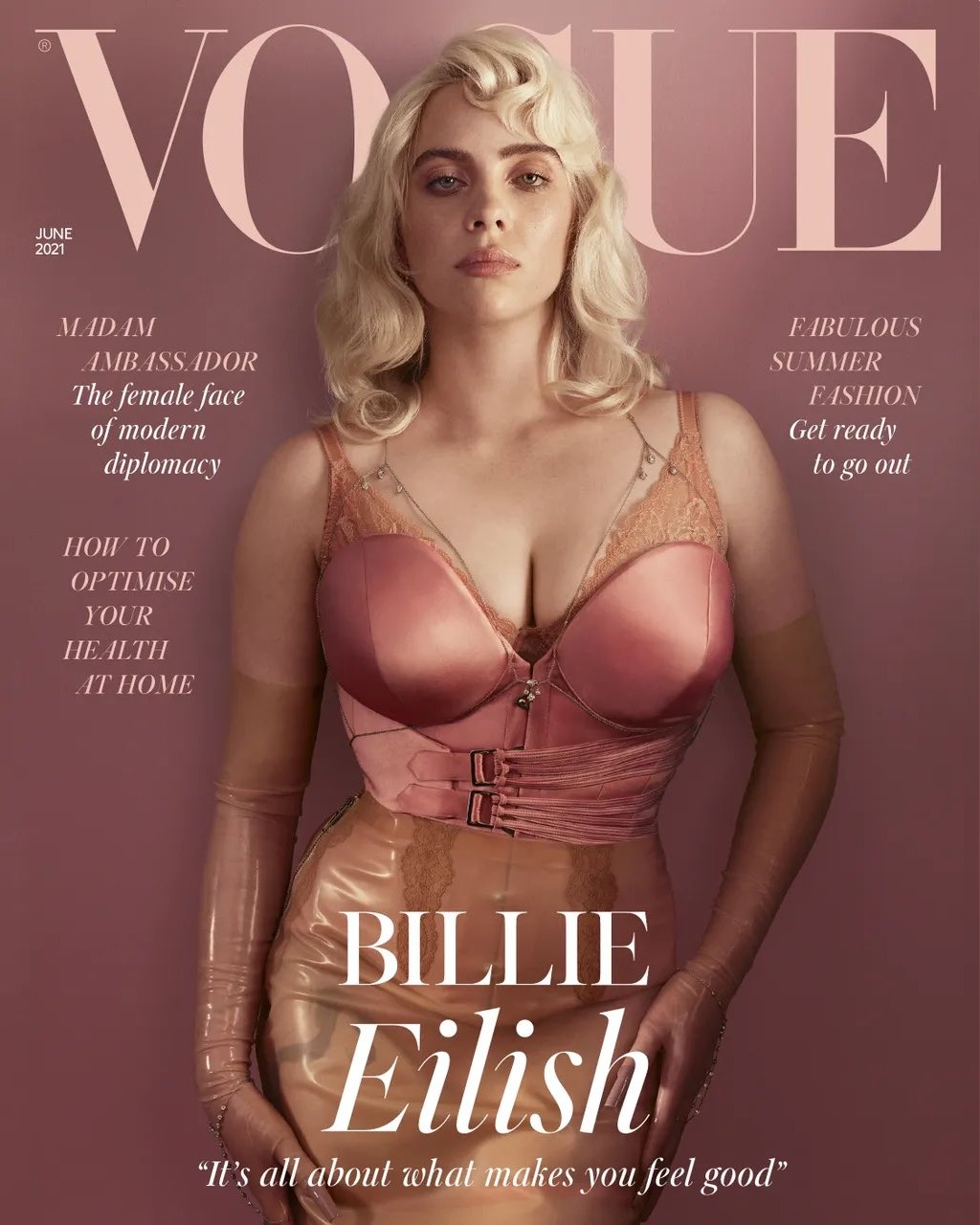 It’s a new era for Billie Eilish across the board. She no longer has the black-and-green hair and it looks like the baggy skaterboi clothes will be gone as well. It’s a new era for her interviews too, which is such a relief. For the past two years, every interview with Billie was the same, containing the same information and very similar quotes and I’m really hope we’re beyond all of that. She’s 19 years old now. She’s blonde and experimenting with her look, which is how we got this British Vogue editorial. I never thought I’d see her go “lingerie-clad blonde bombshell” in an editorial, but she’s absolutely killing it. You can read the full British Vogue interview here. Some highlights:

She loves her blonde hair: She was “ready for it to suck”, but it’s been transformative. “I feel more like a woman, somehow,” she says, surprised.

She wanted to do a “classic, old-timey pin-up” look for the shoot: Although it was entirely her idea, Eilish is apprehensive. “I’ve literally never done anything in this realm at all…Y’know, besides when I’m alone and sh-t.”

Being photographed in a tight tank top: “It made me really offended when people were like, ‘Good for her for feeling comfortable in her bigger skin.’ Jesus Christ?! Good for me? F**k off! The more the internet and the world care about somebody that’s doing something they’re not used to, they put it on such a high pedestal that then it’s even worse.”

Why she wanted to wear corsets: “If I’m honest with you, I hate my stomach, and that’s why.” Eilish predicts one side of the response to the shoot: “‘If you’re about body positivity, why would you wear a corset? Why wouldn’t you show your actual body?’ My thing is that I can do whatever I want.” Confidence is her only gospel, she says, yet that intent has been spun into “a lot of weird miscommunications”. She clears it up: “It’s all about what makes you feel good. If you want to get surgery, go get surgery. If you want to wear a dress that somebody thinks that you look too big wearing, f**k it – if you feel like you look good, you look good.”

The new album: “I’ve grown so much and gotten so much better in my voice, it’s crazy to think about. I think change is one of the best gifts in the world.”

On how teenage girls are victimized by men: “Absolutely. It’s an insane thing. Young women, we’re expected to know and do everything, and be everyone’s mom when we’re like, 15. I used to not understand why age mattered. And, of course, you feel like that when you’re young, because you’re the oldest you’ve ever been. You feel like you’re so mature and you know everything.” But you shouldn’t have to know everything then, she says. The expectation creates space for exploitation. “People forget that you can grow up and realise sh-t was f**ked up when you were younger.”

It can happen to anyone: “I wanted to say that it doesn’t matter who you are, what your life is, your situation, who you surround yourself with, how strong you are, how smart you are. You can always be taken advantage of. That’s a big problem in the world of domestic abuse or statutory rape – girls that were very confident and strong-willed finding themselves in situations where they’re like, ‘Oh my god, I’m the victim here?’ And it’s so embarrassing and humiliating and demoralising to be in that position of thinking you know so much and then you realise, I’m being abused right now.”

Even the fact that a 19-year-old pop star – one of the biggest pop stars in the world – is talking in very real and educational terms about the abuse and exploitation of girls is proof that everything she’s saying here is 100% accurate. Men and boys are allowed almost a complete abdication for their own actions and behavior, and girls and women are not only being victimized, we’re having to educate one another on what’s happening. We’re using our platforms and our spaces to talk to girls and women about the crimes and damage being perpetrated on us, as opposed to using those spaces to talk about literally anything else.

It’s obviously not all dark and educational with Billie – she sounds like she’s in a healthy place these days. She’s gone from sleeping all morning to being an early riser. She’s looking forward to the end of the pandemic but not looking forward to hanging out with all of the people who were breaking lockdown all the time. She sounds really proud of this new album too.