Home » Celebrities » Ben Affleck's Net Worth Is Massive, So, Yeah…He Can Afford That $65 Million Mansion with J.Lo

Much like the literal phoenix tattooed on his back, Ben Affleck is rising from the ashes of his relationship with Ana de Armas and is now dating Jennifer Lopez for round two. And their vibe, if you haven’t already noticed, is best described as thirst with a side of dripping wealth.

These two are fresh off a luxurious European vacation for Jennifer’s 52nd birthday, where they basically spent their time chilling on a massive private yacht and recreating THAT scene from the “Jenny from the Block” video. Meanwhile, Ben spent thousands of dollars on a gift for Jen, and apparently now they’re looking to move in with each other…potentially into a $65 million mansion. With a net worth of $400 million, this kinda spending is NBD for J.Lo, and the same can be said for Ben. Let’s take a refreshing dip into Ben Affleck’s net worth real quick.

Ben Affleck Makes Up to $15 Million Per Movie

Our dude Ben has starred in a ton of movies over the years, and he’s earned a sh*t-ton of money along the way. But according to Celebrity Net Worth, his biggest paycheck came in 2003 for—lol—the literal movie Paycheck, for which he made $15 million. Le irony.

Some other notable non-Paycheck paycheck moments? Ben made $6 million for Reindeer Games, $10 million for Changing Lanes and The Sum of All Fears, and—because you know you’re wondering—$12.5 million for the criminal masterpiece known as Gigli.

Meanwhile, Goodwill Hunting—the movie that launched Ben’s career—was among his smallest paychecks. But it was still pretty big. Here’s what he told Boston Magazine back in 2013:

Kay, But What About Batman?

Ben’s exact Batman salary hasn’t been revealed, ugh, but according to Forbes, he got “a huge paycheck” for Dawn of Justice, which lead to him making $35 million in 2014.

To be honest, it’s not even that far out of his current real estate price range. Ben and his ex-wife Jennifer Garner dropped $17.55 million on a house in 2009 and flipped it for $32 million in 2019 (Adam Levine was the buyer), and then Ben bought himself a $19 million home in the same neighborhood back in 2018. So yeah, he’s can 100 percent afford half of a $65 million mansion, it’s truly no bigs. 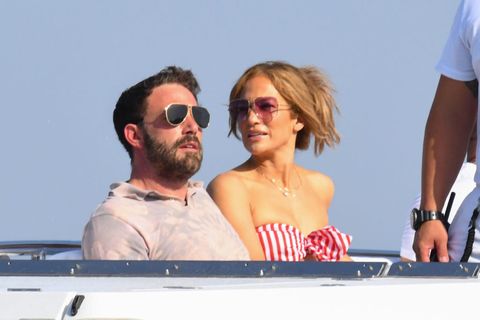 That’d be $150 million, according to Celebrity Net Worth. And if this sounds like a “small” sum considering how much Ben pulls in per movie, don’t forget that he has a ton of expenses, overhead, and taxes—this $150 million is what’s left in the bank after Ben spends his way through all of his paychecks. In other words, this is just a tiny fraction of what he’s has earned over the years. Mind! Officially! Blown!