Home » Celebrities » Are Harry And Meghan’s Many Business Deals In Trouble?

Prince Harry and Meghan Markle signed a couple of pretty huge deals after they left the UK and moved to California. According to BBC News, the Duke and Duchess of Sussex inked a deal with Spotify back in December 2020. They later announced a podcast on the streaming service, but, so far, they’ve only released one, which was dubbed a “holiday special.” At the time the announcement was made, Harry shared, “that’s what this project is all about, to bring forward different perspectives and voices that perhaps you haven’t heard before and find our common ground.”

Harry and Meghan also reached an agreement with streaming giant Netflix. In April 2021, the Associated Press reported that the duke and duchess’ first series on Netflix will have to do with the Invictus Games — a sporting event in which injured or sick servicemen and women compete. The docuseries “will follow a group of extraordinary competitors from around the globe, all service members who have suffered life-changing injuries or illnesses on their road to the Invictus Games The Hague 2020, now set to take place in 2022,” according to a statement shared by the AP.

Flash forward to June 2021, and the duke and duchess haven’t moved forward much with any of these plans. According to The Sun, Harry is planning to take a 5-month break following the birth of the couple’s second child, Lilibet Diana. So, are these deals in jeopardy? Keep reading to find out. 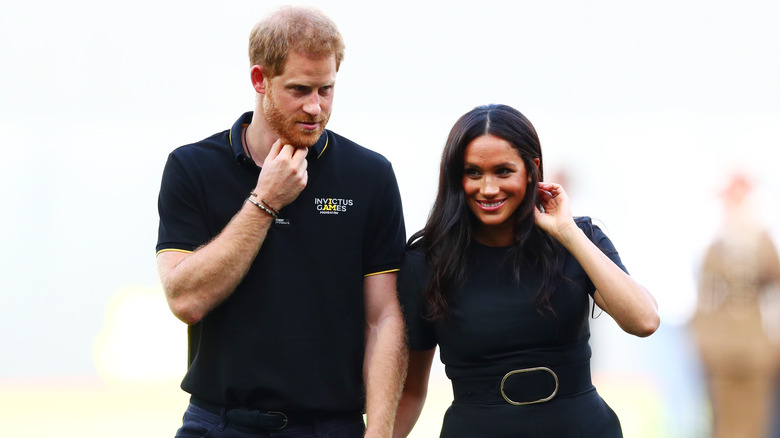 As the Daily Mail points out, Prince Harry and Meghan Markle have only released 35 minutes of podcast material on Spotify, and nothing has been officially released on Netflix yet. Now that there’s a new baby in the Sussex home, some are wondering if Harry and Meghan will be able to keep up their end of these big deals. “We’re being told they’re having up to five months off and people who are paying them a lot of money will expect something in return. They seem to be using up a lot of ammunition very early and putting a lot of stuff out there in terms of deals and agreements with lots of firms. The question might be asked whether they have too much on their plate,” royal expert Phil Dampier told The Sun.

Meanwhile, a PR expert named Mark Borowski told The Sun that Harry and Meghan have “pre-recorded” some material for Spotify that will carry them well into the new year, but they have yet to deliver the goods. “Harry and Meghan will be under scrutiny to deliver. What are these guys going to produce? What do they stand for?” he said.

It seems as though Harry and Meghan do have things in the works, but they just haven’t released them yet. According to The Sun’s report, however, the couple has to follow through in order to get paid, so it’s likely we’ll have some content soon.