Amelia Hamlin is giving Victoria’s Secret models a run for their money. The model rocked frilly pink lingerie in new photos over the weekend.

Amelia Hamlin channeled her inner Victoria’s Secret model and wore frilly pink lingerie this weekend. The model, 20, wore a sexy bra and thong set from Boux Avenue and documented the look in a series of photos on Instagram on Saturday, Aug. 21.

The daughter of Lisa Rinna and Harry Hamlin also held an Instagram Q&A on her stories on Saturday, citing the fact that she hasn’t been “super engaging” as the reasoning behind the impromptu session. Amelia answered a series of “favorites” questions during the Q&A, including favorite meal and favorite tattoos. Pasta for the former and some planetary ones for the latter. The model revealed hidden tattoos behind her ears, one of an alien and another of a planet with a ring around it, and cited them as her faves.

The tattoo show and tell comes after her famous mom expressed a surprising change in tune and said she was OK about Amelia’s relationship with a much older Scott Disick, 38. Despite initially voicing her reservations about the relationship, Lisa appeared on Watch What Happens Live in early August and said she was “thrilled” about her daughter’s happiness. “Listen, I will say this: Amelia’s very happy right now and you really want your kids to be happy, so Harry and I are very thrilled that she’s happy,” she told Andy Cohen. 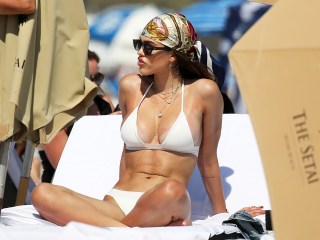 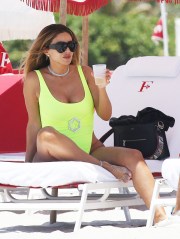 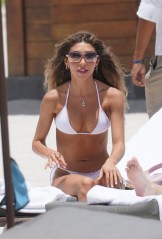 The comments were a major departure from Lisa’s reaction to the relationship on a June episode of Real Housewives of Beverly Hills. “She’s 19. He’s 37 with three kids. Hello? I’m a lot nervous about it,” Lisa vented to co-star Erika Jayne, referencing Scott’s children  Mason, 11, Penelope, 9, and Reign, 6, with ex Kourtney Kardashian. “We’re thinking it’s a phase, right?” Lisa continued. “It’s a phase. Whatever. I don’t want to bring attention to it.” She added that while husband Harry has been “more calm about it,” it has been difficult for her to come around.

While the age gap is a source of controversy, a source previously told HollywoodLife that Scott simply does not care about what people think about his relationship. “He really couldn’t care less what people think,” our source said. “All that matters to him is what his inner circle thinks. His friends and loved ones are fine with it and his kids really like Amelia so that’s what counts to him.”