Amber Heard supporters often have a target on their backs online. However, the fight grew past a celebrity court case and into one about truth, domestic abuse, and morality. Heard supporters recently explained their stance and why they choose to stand at the courthouse to defend the actor in the Johnny Depp defamation trial.

The Heard and Depp trial continues to consume social media, as they discuss the actors, their legal teams, and their witnesses. However, the public opinion is massively in favor of Depp, leaving Heard supporters in the far minority. Various social media influencers also continue to poke fun at the trial with most of them expressing support for Depp.

Facebook, TikTok, and Instagram have many discussions around the trial, but Twitter is the primary platform that Depp and Heard supporters are pursuing to post their opinions. However, other folks simply want the social media frenzy to come to an end, especially in a time where more important matters are at play, such as the attack on women’s rights. 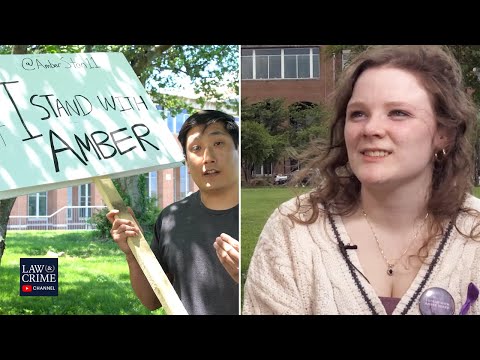 The Law&Crime Network YouTube channel interviewed some of the Heard supporters outside of the courthouse. They wanted to discuss their viewpoint. There is a lot of controversy surrounding those who are defending the Aquaman actor. However, they rarely get the platform to adequately discuss where they’re coming from.

The video showcases two individuals standing outside of the courthouse. The first has a sign that reads “#IStandWithAmber” along with his Twitter handle at the top. Meanwhile, the second more recently engaged with the trial but takes a slightly different approach to her reasoning.

Heard supporters point to the vicious online attacks against the actor for why they are coming to her defense. The first supporter called the online attacks “very sad to see.” Meanwhile, the second says that it “breaks my heart” to see her treatment.

“She’s being forced to relive all of this in front of the world and they just hate her for it,” one Heard supporter said. “That breaks my heart. I mean, she leaves court every day and people just shout at her obscenities, saying, ‘I don’t believe you.’ Every day. People made it into a funny TikTok trend to dance and act out her sexual assault testimony. It’s just sick. That’s why I care.”

Additionally, the second Heard supporter talked about “mutual abuse” and why she doesn’t believe in it. She talked about how Depp had all of the power in their relationship because of his fame and riches.

Freedom of speech and opinion

Regardless of the difference in opinion, the Heard supporter believes in peaceful conversations where both sides are heard out. Additionally, this is a big reason why the second of the Heard supporters decided to stand outside of the courthouse – to express her freedom of speech and opinion.

How to get help: In the U.S., call the RAINN National Sexual Assault Telephone Hotline at 1-800-656-4673 to connect with a trained staff member from a sexual assault service provider in your area.