Alec Baldwin is once again speaking out about claims that his wife Hilaria Baldwin has been pretending to be Spanish (complete with a fake accent)—only this time he’s telling an Instagram follower to “go f*ck yourself.”

Alec’s comment was left on the below post—a quote from Mark Twain that reads, “A lie can travel half way around the world while the truth is putting on its shoes.”

Obviously, the comments are largely full of people calling out Hilaria and dropping cucumber emojis (lol), and—as E! News first reported—Alec responded with “go f*ck yourself” to someone who wrote “Like your wife being Spanish when she lived in Massachusetts her entire life. I take it her accent is fake as well? FRAUDS!” 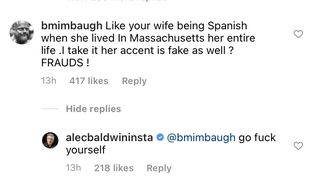 Just FYI in case ya missed it, Hilaria has also responded to the controversy, confirming that her name is Hilary and that she was, in fact, born in Boston: