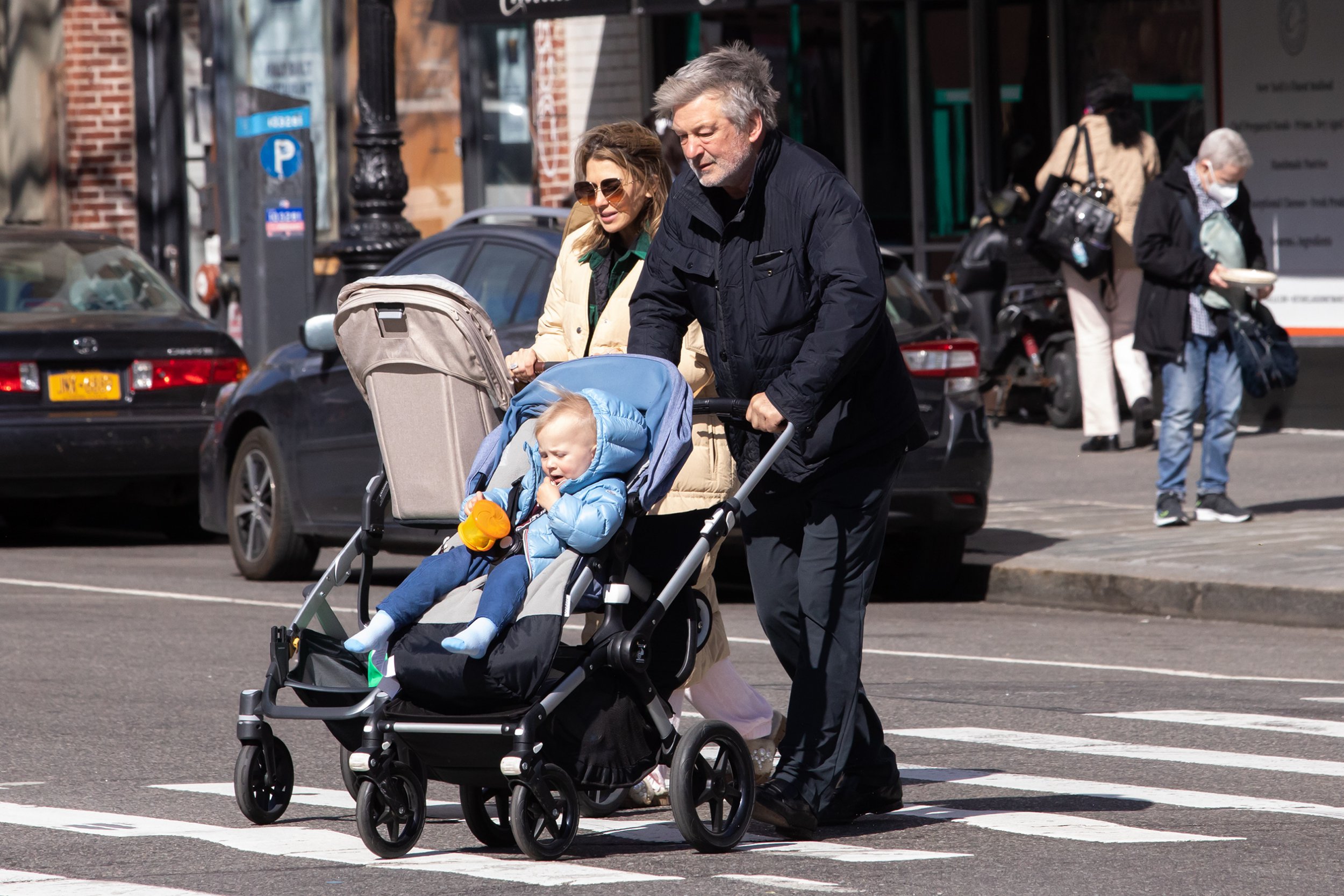 Alec Baldwin kept a low profile as he joined wife Hilaria for a stroll in New York, as they prepare to expand their family once again.

The couple are set to welcome their seventh child together, with the expectant mom confirming their baby news last month.

They were spotted hitting the streets for some fresh air, following a tough few days for the family.

The 30 Rock actor, 64, went low-key for the outing, pushing a stroller in a black T-shirt and navy trousers, covering up against the chill in a black coat at one point.

While his wife, 38, pushed along another pram, dressed down in a long cream puffer jacket over a green shirt and comfortable Ugg slippers.

She could be seen gazing lovingly into the pushchair as they walked along together, making the most of the sunshine.

The pair, who tied the knot in 2012, confirmed in March that they will be adding to their brood for the seventh time.

‘After many ups and downs over the past few years, we have an exciting up and a huge surprise: another Baldwinito is coming this fall,’ the mom-of-six wrote on Instagram, beside a sweet family video.

‘We were pretty sure our family was complete, and we’re beyond happy with this surprise.

‘I’m sharing with you the moment we told the kids – as you can see, they are super excited!

‘Our new baby is a very bright spot in our lives. A blessing and a gift during such uncertain times.’

While Hollywood star is also dad to eldest child Ireland Baldwin, who he shares with ex-wife Kim Basinger.

Baldwin recently made headlines after footage was released, showing the moment that he learned of Halyna Hutchins death.

There was tragedy on the set of movie Rust at the end of last year when a gun he was holding accidentally discharged during a rehearsal, killing the cinematographer and injuring director Joel Souza.

Hutchins was pronounced dead at a nearby hospital, while Souza was able to recover from his injuries.

After Baldwin was exonerated in a report into the incident, Santa Fe County Sheriff’s office released all files relating to the ongoing investigation, including a recording of the moment he was informed that Hutchins didn’t make it.

In the video, a police officer said: ‘I have some unfortunate news… She didn’t make it.’

He immediately froze and covered his mouth, exclaiming: ‘No!’

Following an investigation into the incident leading up to Hutchins’ death, which ‘exonerated him’, Baldwin’s lawyers issued a lengthy statement, reading: ‘We are grateful to the New Mexico occupational health and safety bureau for investigating this matter.

‘We appreciate that the report exonerates Mr Baldwin by making clear that he believed the gun held only dummy rounds.

‘Additionally, the report recognizes that Mr Baldwin’s authority on the production was limited to approving script changes and creative casting.

‘Mr Baldwin had no authority over the matters that were the subject of the bureau’s findings of violations, and we are pleased that the New Mexico officials have clarified these critical issues.

‘We are confident that the individuals identified in the report will be held accountable for this tragedy.’