A$AP Rocky says race is not an issue in his arrest or detention, TMZ has learned … but the reality is, he has to say that.

There’s certainly plenty of smoke … as we reported, G-Eazy — a white rapper — was arrested in Sweden for assault and cocaine possession, yet he only spent a day-and-a-half in jail, pled guilty, coughed up $9k and he was on his merry way. 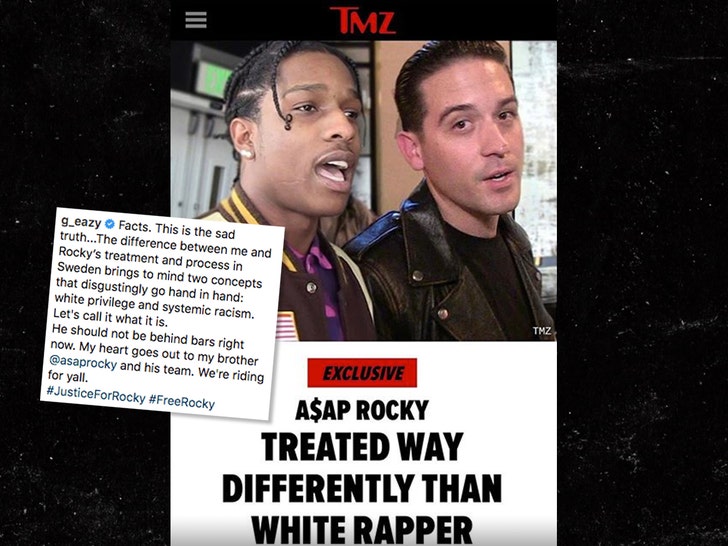 A$AP’s been in jail going on 3 weeks and he hasn’t even been charged, and when that happens it will only be for aggravated assault … an assault that was provoked by the alleged victim.

That said, our A$AP sources say he has made it clear to all in contact with him … he doesn’t think he’s being held because he’s black. That’s consistently been his story.

Here’s the reality … if A$AP or his team DARED suggest he’s being held because he’s a black rapper, there would be hell to pay with the prosecutor and probably the judge as well. We’ve spoken with Swedish Embassy and other officials, and they’re all adamant … they do not discriminate. If foreigners suggested otherwise in court, our sources say it would be a disaster.

We’re told A$AP will be charged and will then face 6 years in prison. The best defense they got is provocation by the alleged victim.

One thing’s clear by now … all the work the State Dept. and President have done trying to lobby Swedish officials hasn’t worked … in fact, it may have been counterproductive because prosecutors may not like what they consider intermeddling, and the Prime Minister is siding with them.