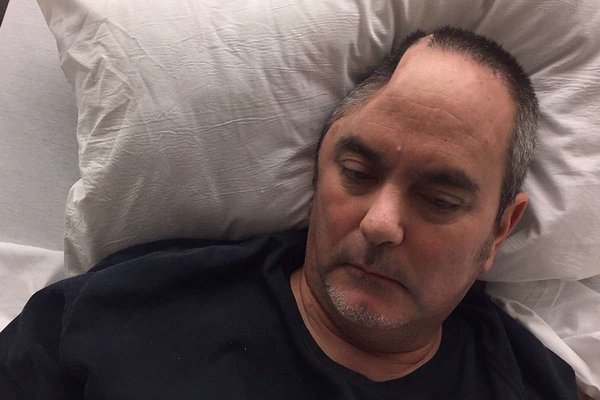 [Sign up here to receive the Sports newsletter in your inbox every Thursday.]

What happened at 555 California Street in San Francisco, known as Black Rock to skaters, began as a fairly common confrontation.

A group of skaters descended upon a location, one that had been scouted as ideal for executing new tricks, and they faced security. A guard asked the group to leave, and a dispute ensued.

Many of these encounters are captured, glorified and posted online by skateboard media, athletes and fans.

But in this case, things quickly got out of hand. It was all caught on camera. Minutes after a group of skaters arrived at 555 California Street, Dan Jansen, a security guard who had worked at the building for 15 years, asked the skaters to leave and placed steel barriers in their way. The skaters moved the barriers, and an increasingly tense show of force from both sides followed.

It became violent after Jansen picked up a skateboard and tossed it in the street. Seconds later, he was lying unconscious on the pavement.

Surgeons needed to remove a part of Jansen’s skull and frontal lobe to reduce swelling. He was left with permanent brain damage, and nearly nine months later, he is struggling with walking and recognizing his family.

A professional skateboarder, Jesse Vieira, was arrested in connection with the confrontation and charged with assault with a deadly weapon, assault with force likely to cause great bodily injury and battery with serious bodily injury. He pleaded not guilty and claimed self-defense. In May, a jury deadlocked. Prosecutors have set a new court date for September.

“For the skateboarding world, which for years has glorified disputes with security guards, the confrontation has resulted in collective soul-searching at a crucial moment, just a year before the sport’s Olympic debut at the 2020 Games in Tokyo,” Matt Ruby and Conor Dougherty write.

Regardless of the outcome of the trial, many in the world of skateboarding say this is a moment of reckoning for all those involved in the sport.

Aaron Hicks made the biggest catch of the Yankees’ season in one of baseball’s most exhilarating games of the season, James Wagner writes.

The jaw-dropping play — a full-extension diving grab at the warning track with the tying and winning runs on base Tuesday night — ended a heavyweight battle between the Yankees and the Minnesota Twins. Final score: Yankees 14, Twins 12.

For much of his childhood, Kristof Milak studied low-quality videotapes of Michael Phelps’s races for tips on how to refine his butterfly technique. This week, the 19-year-old Hungarian shattered the world record in the 200-meter butterfly, a mark Phelps had held for more than 18 years.

“As frustrated as I am to see that record go down, I couldn’t be happier to see how he did it,” said Phelps, who won the event in three Olympics and lowered the world record seven times. “That kid’s last 100 was incredible. He put together a great 200 fly from start to finish.”

After her dominant performance at the 2016 Olympics, Katie Ledecky said her motivation was knowing that somewhere, a young swimmer was training to unseat her, Karen Crouse writes.

In Case You Missed It

The maneuver above is called the super tuck, a position in which a cyclists minimize the drag of air above their bodies. And it’s extremely dangerous. Cyclists are unable to brake until they are back in their seats.

“So far no one has plunged off a cliff, although a few have come close,” Michael Powell writes.

The science on the super tuck, and whether it actually makes cyclists faster, is sketchy. But in a sport where crashes are expected, and races can be won in seconds, athletes look for any possible advantage.

“I think we’re having a wave of women’s sports with things like the World Cup,” Billie Jean King told Telegraph Women’s Sport. “We’re having a second wave — it’s in the air.”

The tennis legend spoke with the Telegraph about this moment in time, which has “echoes of the 1960s and ’70s when she first starting shattering preconceptions about women’s sport,” Charlie Eccleshare writes.

“Women need to organize. Organize, organize, organize,” King said. “The women’s football team in the U.S. is the team, it’s not one person. We find power in numbers, and you find support in one another.”

What to Watch This Weekend

All times are Eastern.

W.N.B.A. This year’s W.N.B.A. All Star Game will be in Las Vegas for the first time. Elena Delle Donne of the Washington Mystics and A’ja Wilson of the Las Vegas Aces were voted captains of the teams. Team Delle Donne vs. Team Wilson face off Saturday (3:30 p.m., ABC).

M.L.B. The Yankees and the Red Sox, who last played each other in London, resume their season series with four games in Boston, beginning Thursday (Saturday, 4:05 p.m., FS1; Sunday, 7:05 p.m., ESPN).

AUTO RACING NASCAR is back at Pocono. Kyle Busch won the season’s first race there in June, and has won at least one Pocono race each year since 2017 (Sunday, 3 p.m., NBCSN). With a win at Iowa last weekend, Josef Newgarden expanded his lead in the IndyCar Series with five races to go. The circuit races at the Mid-Ohio Sports Car Course on Sunday (Sunday, 4 p.m., NBC). It’s a home race for Formula One leaders Mercedes at Hockenheimring for the German Grand Prix on Sunday (9:05 a.m., ESPN).

CYCLING The Tour de France comes to a close this weekend with a flat 128-kilometer stage, beginning in Rambouillet and finishing in Paris on the Champs-Élysées (Sunday, 7:55 a.m., NBCSN).

Please tell us what you want to read in this newsletter. We want to keep it fresh and interesting, so email your thoughts to [email protected]

Looking for more N.B.A.? Go behind the N.B.A.’s curtain with the league’s foremost expert. Sign up for Marc Stein’s email.

Looking for more soccer? Chief soccer correspondent Rory Smith takes you from the biggest matches to the smallest leagues, covering the tactics, history and personalities of the world’s most popular sport. Sign up here.

Review our newsletter help page or contact us for assistance.