Home » Celebrities » A Message of Hope From the Dalai Lama

In times of trouble, the Dalai Lama’s story is one that bears repeating. The hardships include being plucked from his peasant parents as a toddler and ensconced in a spooky old palace, where he was tasked with relearning nearly every ounce of the knowledge he had managed to sponge up in his previous life as the 13th Dalai Lama. Then being required, at 15, to confront Chinese authorities who were invading his homeland and would soon take it over entirely. And they certainly include the time he, age 23, was forced to disguise himself and flee Tibet under cover of night, spending the next couple of weeks crossing deadly stretches of the Himalayas before arriving as a refugee in India, where he has lived in exile for the past 61 years.

Through it all, his very job as spiritual leader of the Tibetan people was to act with equanimity. That he did so — and continues to do so — has made him an international inspiration, a beacon of hope to millions. Recently, he gave Rolling Stone a chance to delve into how he’s kept his cool all these years — and how we might as well, even as the world implodes around us.

Your holiness, we’re in a moment when there’s a lot of anxiety and grief around the coronavirus. What‘s your advice to people who are struggling
Now this pandemic is very serious. Very sad. We’re just so afraid. That’s not useful. We must attack it — specialists, scientists, doctors, I very much appreciate. If the problem can [be] overcome, then no need to worry; make effort to overcome. If no way to overcome the problem, there’s no use too much worry.

But it’s hard not to worry. How do you keep yourself from worrying?
Through training how to tackle destructive emotion, and how to develop positive emotion. This is very important. All destructive emotion [is] based on appearances, not reason, so we cannot meditate on anger, hatred, fear. But positive emotions such as compassion, altruism, or enthusiasm are based on reality, on reason, so we can train [them] through meditation. Ignore seeing, ignore hearing, pay more attention [to] your mind. Only the human brain has the ability to concentrate on a point and analyze.

What kind of student were you?
I was quite lazy! [Laughs] My tutor sometimes threatened to show whips! But gradually, my mind, my brain [grew] quite sharp. Certain subjects scholars find difficult, for me [were] easy. So I believe that [in] my previous life that subject [was] familiar.

The album Inner World was released on your 85th birthday. Is there something beneficial that your music has been able to do in this time that you have not been able to do?
My main practice is altruism. My body, voice, mind [are] dedicated to the well-being of 7 billion human beings. Nice sound comes, they feel happy. Sound affects the mind. Music comes [on]? Their face like [smiles broadly]. 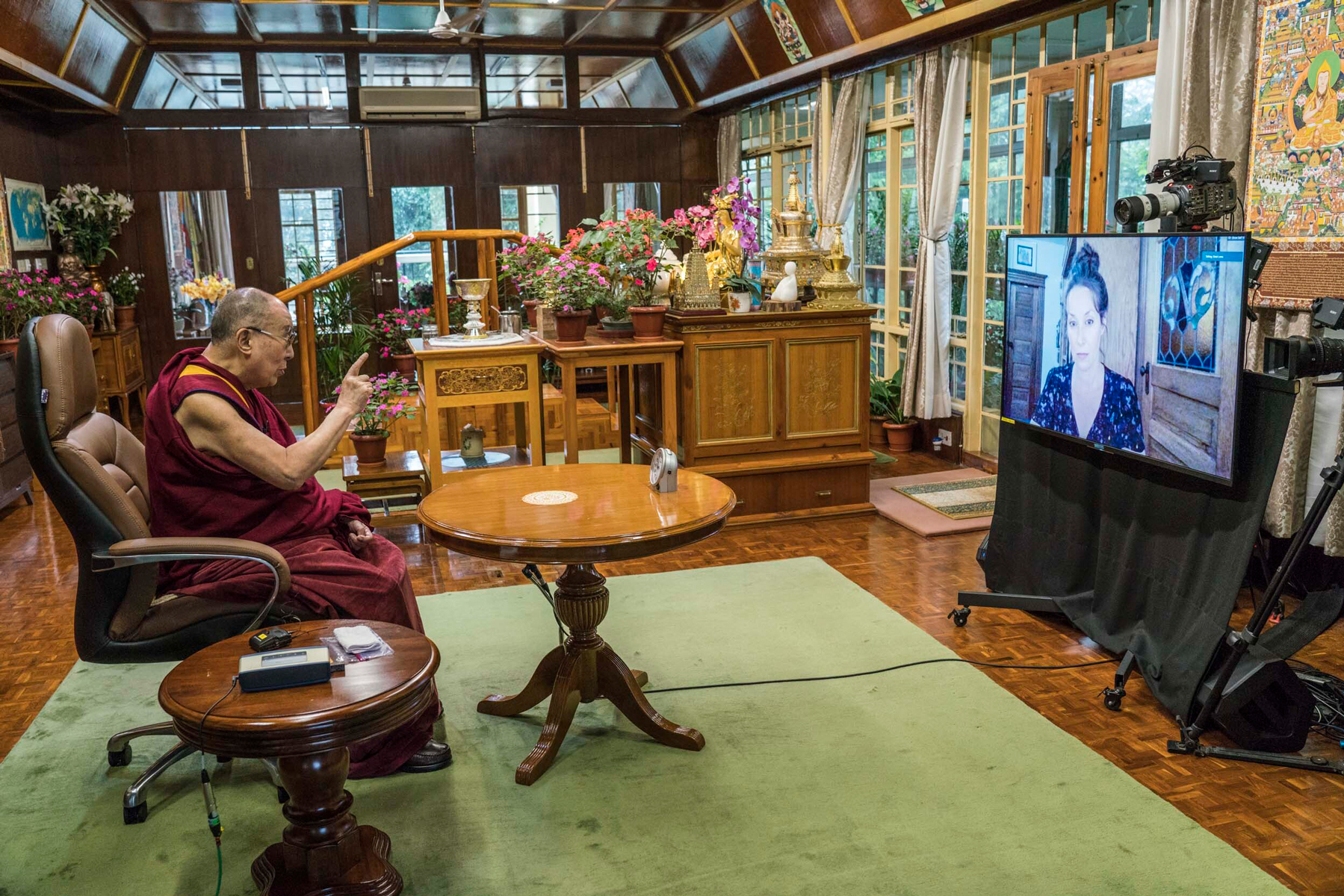 If you were to meet Donald Trump, is there something you’d like to say?
Today, my number-one commitment is try to promote a sense of oneness of 7 billion human beings. I’m hoping all the leaders of the world, and particularly the big nations’ leaders — America, Russia, China, India — see oneness of all 7 billion human beings. When he became president, he mentioned “America First” — [with] that I have some reservation. America [is] the leading nation of [the] free world, so morally, historically, America has responsibility.

Children at two years, they play together. They don’t care [about] other child’s religion, other nationality. Then once the children [start] education, [there’s] not much talking about warmheartedness, just knowledge; and that creates some feeling of “we” and “they,” and then, gradually, “my nation,” “their nation,” “my religion,” “their religion.” Our education should include moral teachings. Religion? No. But moral teaching. Your own successful life very much depends on warmheartedness.

What you call “wise selfishness”?
Taking care [of] others is the best way you fulfill your self-interest. Altruism [is] very useful, very important to keep peace of mind. Any person I meet, I feel [are] brothers, sisters. That brings me inner peace. I think I can say, Dalai Lama, wherever I go, always smiles.