The stars were shining bright on Sunday! This year’s Academy Awards brought out the biggest names in Hollywood for a night of fun and celebration.

Coming together in one of the first non-virtual awards shows since the start of the pandemic, many of the industry’s best and brightest were invigorated and excited to be coming together once more.

There was no host this year, but that didn’t keep the show from stalling, as the long-awaited (and two-months-delayed) ceremony went all out to honor the multitude of films, filmmakers and stars who were nominated at this year’s big show.

From some long-awaited wins to some truly touching acceptance speeches, here are all the best, biggest and most memorable highlights from Sunday’s 93rd Oscars.

Regina King Kicks Off the Show With Effortless Style 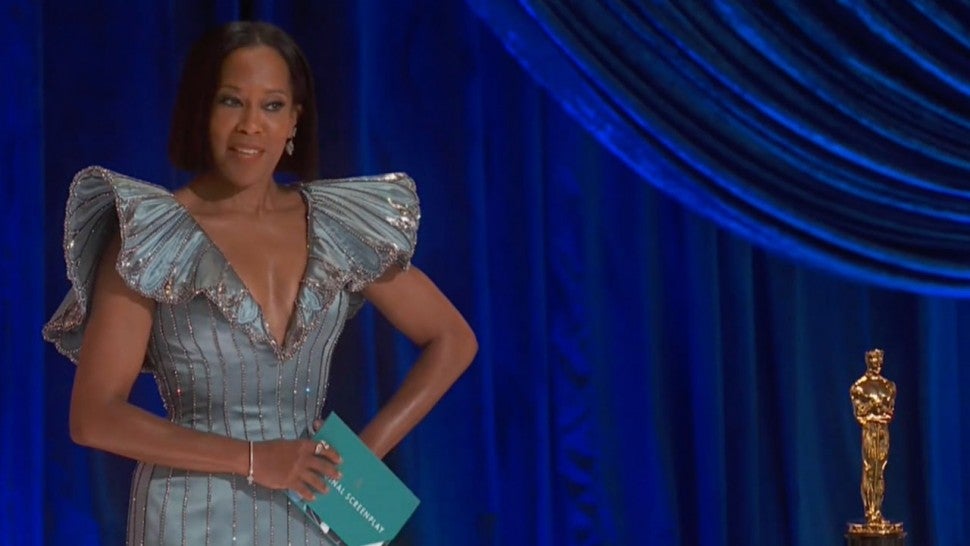 King started this year’s show with an eye-catching cinematic opening and a powerful message. Forgoing a host yet again this year, the awards show began with a movie-like opening, akin to the films the Oscars celebrates. In a fantastic tracking shot, King picks up an Oscar trophy and walks through Union Station and up to her place at center stage to start the show by presenting the award for Best Original Screenplay after sharing some powerful sentiments.

“It has been quite a year, and we are still smack dab in the middle of it. We are mourning the loss of so many,” King shared in her brief monologue. The actress and filmmaker also referenced the recent conviction of George Floyd’s killer, Derek Chauvin, and mentioned that if things had gone differently, she may have traded in her heels for marching boots. “As a mother of a Black son, I know the fear so many live with, and no amount of fame or fortune changes that. But tonight, we are here to celebrate. This was a hard year for everyone, but our love of movies got us through.” 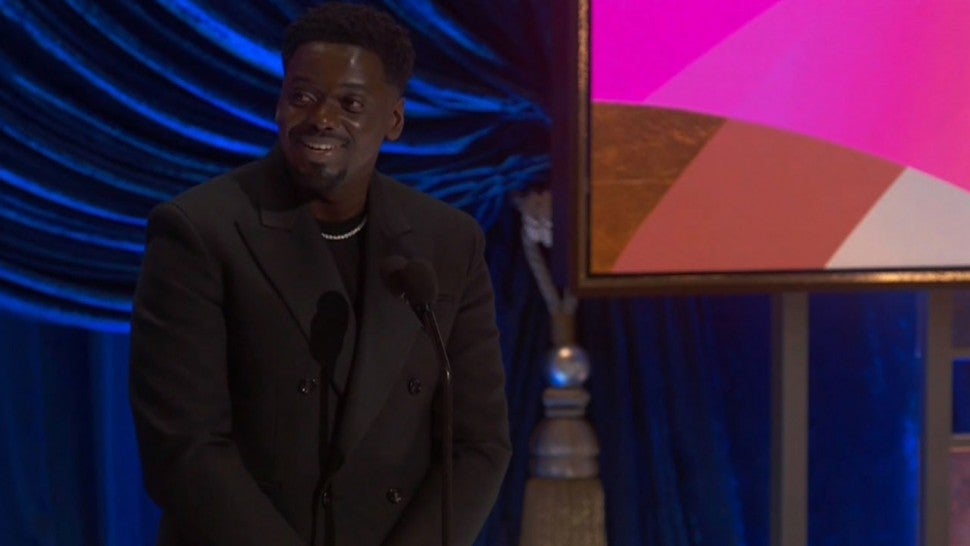 The 32-year-old actor took home the Best Supporting Actor statuette for his role in Judas and the Black Messiah on Sunday night — and amid the many powerful comments made in his acceptance speech, he also made a memorable reference to his mom’s sex life. It was a funny, candid moment that had everyone laughing — everyone, that is, except his mom, who was in the audience.

“You got to celebrate life, man! We’re breathing, walking, it’s incredible. It’s incredible. My mom, my dad, they had sex. It’s amazing,” Kaluuya said, laughing. “You understand? I’m here. You know what I mean? I’m so happy to be alive.”

Daniel Kaluuya ‘s mom literally said “what is he talking about” #Oscarspic.twitter.com/vrGHBNLn7a

The camera hilariously caught Kaluuya’s mom’s reaction, as her look of pride — which she’d been beaming with during his speech —  turned to a look of confusion and bafflement, mixed with a healthy dose of irritation. 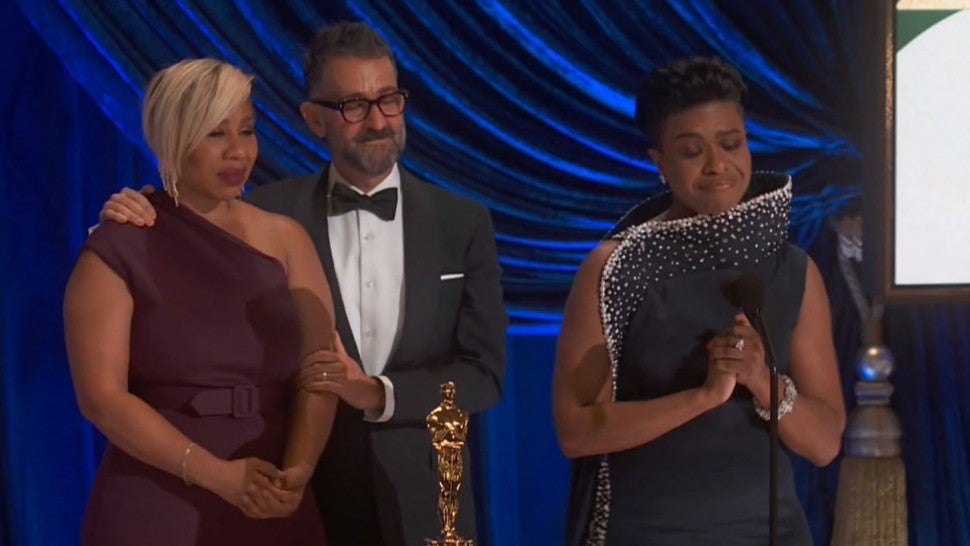 The stylists for Ma Rainey’s Black Bottombecame Oscar groundbreakers this year with their monumental win. Makeup artist Sergio Lopez-Rivera, hair department head Mia Neal, and Viola Davis’ personal hairstylist, Jamika Wilson, took home the statuette for Best Makeup and Hairstyling, with the latter pairing becoming the first-ever Black stylists to win in the category. Neal took the lead for the acceptance speech, thanking the Academy, Netflix, Davis, and “the spirit of Ma Rainey.” 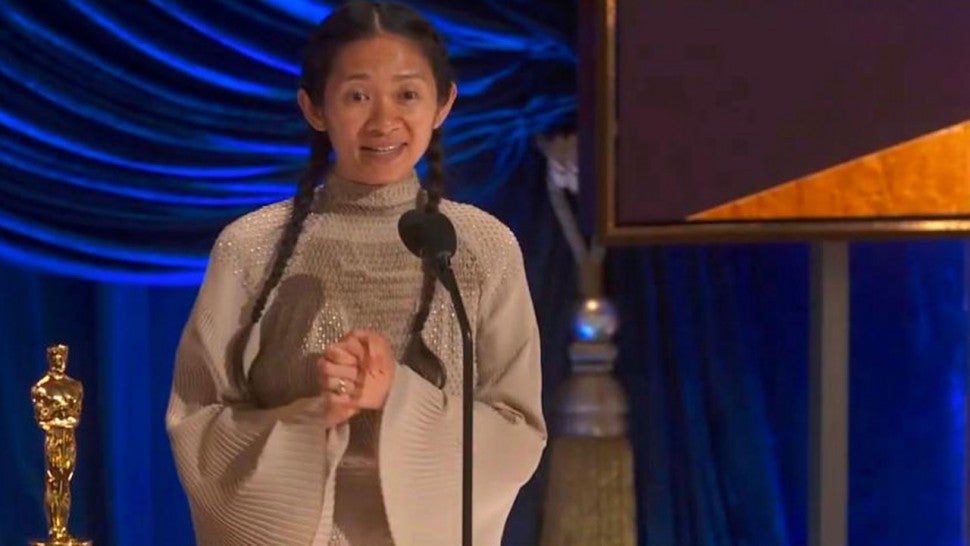 When Nomadland creator Chloe Zhao took home the Oscar for Best Director, the acclaimed filmmaker made history as the first woman of color — and second woman ever — to take home the Oscars’ top directing honor. The first, and only other woman to earn the award, was Kathryn Bigelow for 2009’s The Hurt Locker.

“When I was growing up in China, my dad and I would play this game. We would memorize classic poems and text and try to finish each other’s sentences,” Zhao recalled during her acceptance speech, before reciting one that translates into, “People at birth are inherently good.”

“I have always found goodness in the people I met,” she continued, adding that “this is for anyone who has the faith and courage to hold onto the goodness in themselves.”

The Minari star — who himself was nominated for an Oscar this year — presented the award for Best Visual Effects, and he introduced the award by sharing an incredibly sweet memory of his mother that also served as an example of how “great visual effects can completely change a film’s experience.”

“When I was seven, my mother took me to see Terminator 2. I’m pretty sure she didn’t know what the movie was about, and to her and my surprise, we got to see some stuff. We saw the T-1000 get his head blown off, and then reform back together, then Arnold cut his arm skin to reveal a robot hand,” Yeun recalled. “I remember glancing up at my mom to see if it was OK for me to watch, and my mom playing it cool as if she meant to bring me to this movie. But maybe that’s just my memory. Maybe she reveled in the fact that she got to see a badass mom duke it out with future robots with her son in 1991.”

Follow along at ETonline.com for all our Oscars live updates, including the Oscars winners list, updated as trophies are handed out.