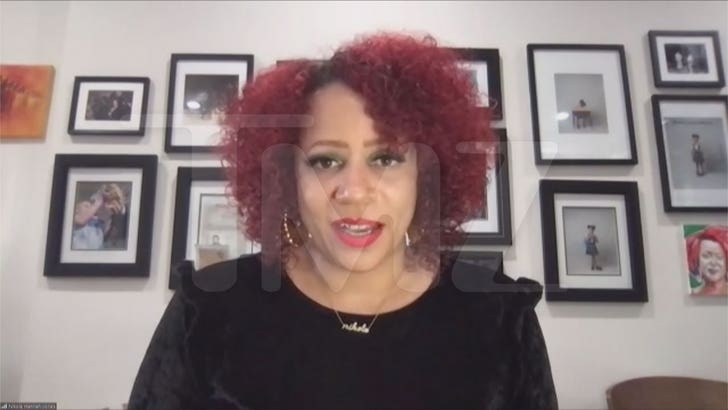 ‘The 1619 Project’ is celebrated, debated and, for some, hated … and that’s partly why its creator has written a couple of sequels, of sorts — works she’s urging her most fervent critics to simply read before tearing it apart.

Nikole Hannah-Jones, who developed ‘1619’ for the NYT, has turned her long-form journalistic endeavor from a magazine series into a book collection … and she came on “TMZ Live” to dissect why she thinks the concept alone pisses off so many, especially on the right.

If you’re unfamiliar, ‘1619’ theorizes our nation’s foundation traces back to that year — instead of 1776 — when African slaves were first brought here, and explains how the slave trade continued to impact American politics and economics for centuries.

Now, back to the original question … what is it that makes people so angry that it influences them inside voting booths???

In NHJ’s eyes, their fury pretty much boils down to propaganda, and oftentimes, ignorance … much in the same way critical race theory is often confused or mischaracterized by people who have no sense of what it really is. Something that was on display during Virginia’s gubernatorial race this year.

Nikole says the strongest critics of the 1619 Project often haven’t even read it — so they don’t understand what they’re arguing against. But, if they’d simply absorb the material, they’d probably learn something valuable … even if they walked away still disagreeing, an outcome she says she’d accept, knowing it was at least considered.

Bottom line … Nikole just wants folks to give her work a fair shot … spark a conversation, and then let the chips fall where they may.